Terry Toons Cartoons in the public domain on broadcast masters. 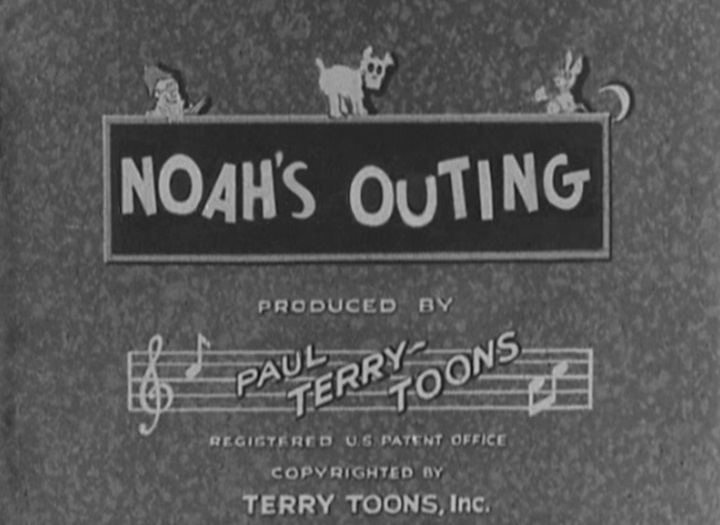 Beauty Shop Terry Toons 1950 Color
Buzzy Buzzard wants to turn all the hens into food, but Dinky is not fooled. How will he save them?

Billy Mouse Akwakade Terry Toons 1940 Color
The title is a take-off parody of Billy Rose's Aquacade, and uses an ordinary bathtub, as aqua-mice perform aquatic ballet dances and water sports. The soap bubbles float downstairs to where the dog and cat are sleeping, who blame each other for the disturbance, and have a fight about it. When they learn the mice are the bubble producers, they go after them with a vacuum cleaner

Black Duck, The Terry Toons 1929 Black & White
The Black Duck is sent away because of his feather color and tied to a tree. Then he's a hero when he saves the day and chases away the mean cats.

Canine Comedy Terry Toons 1935 Black & White
Puddy the Pup was a Terrytoons cartoon character who was featured in a short series from 1935 to 1942. The character is a white dog with a black ear, a design similar to generic dogs in various Terrytoons.

Happy Circus Days Terry Toons 1942 Color
A cute little blond moppet and his dog see the circus parade and rush off to the circus' entrance, where Barker Bill describes the wonders that lie within, evoking their images.Like many Terrytoons, this is too cute for me to enjoy, although the cartoon is certainly competently directed by Connie Rasinski, with nicely timed and executed gags in candy-box style Technicolor.In terms of cartoon history, this is the introduction of Barker Bill, who shills for the circus. Barker Bill was used by Terry for his first foray into television in 1953, to introduce his cartoon show on CBS. It ran until 1955 and was largely forgotten, although the network remembered it well enough to buy Terry's entire cartoon library after he retired and every TV print used an instrumental version of the Barker Bill theme.

Last Round Up Terry Toons 1943 Color
During a training session, an exploding bomb sends Gandy Goose and Sourpuss straight into Germany, where the do battle with Hitler (a pig) and Mussolini (a monkey).

Talking Magpies, The Terry Toons 1946 Color
In this debut cartoon of the Heckle and Jeckle series, an old man (Farmer Al Falfa) is trying to get some sleep while a group of magpies squawks on relentlessly. Try as they might, those birds just can't stay quiet.

Who's Who In The Jungle Terry Toons 1945 Black & White
Gandy Goose and Sour Puss go hunting lions in the jungle and find out the King of the Beasts is not the most fearsome prey in this fine Terrytoon.Gandy and Sourpuss had become Paul Terry's second stars with the rise of Mighty Mouse. With their Ed Wynn and Jimmy Durante voices -- although Gandy is silent in this one -- and their Laurel and Hardy act, they were thrust into the stories that Terry's studio had been doing since its founding. They usually delivered on the laughs, and this one is no exception.However, the next set of Terry stars was on its way. Within three months, two talking magpies would show up on the screen...

Ye Olde Songs Terry Toons 1932 Black & White
The Terrytoons are oddly interesting, mainly for anybody wanting to see (generally) older cartoons made by lesser known and lower-budget studios. They are a mixed bag in quality, with some better than others, often with outstanding music and with some mild amusement and charm and variable in animation, characterisation and content. 'Ye Olde Songs', while far from being among either the best or worst Terrytoons, is a step down from the previous 1932 cartoons 'Noah's Outing' and 'Peg Leg Pete' (there are other 1932 cartoons listed, but unavailable as far as can be personally seen to watch). It's watchable, but fairly average fare with an old premise that is not done much new with. Its main reason for viewing is mainly for anybody striving to see every Terrytoons available like me. Best asset is the music, which predictably is incredible. It is so beautifully and cleverly orchestrated and arranged, is great fun to listen to and full of lively energy, doing so well with enhancing the action. Some of the backgrounds are detailed enough. The songs are great infectious and performed very well, there is a charm that never feels forced and there are enough gags to keep one entertained and ones that amuse enough. Farmer Al Falfa avoids being annoying.With the exception of some of the backgrounds, the animation is not good here. Even for Terrytoons, while not doing as much cheating as some earlier cartoons, it is primitive at best and there is a lot of crudeness and over-simplicity going on in the backgrounds.Story is non-existent and doesn't have enough lively pacing or memorable characters (the rest are very bland) to make up for that. This is especially so towards the end, while there is not much momentum and one doesn't remember the ending that much.