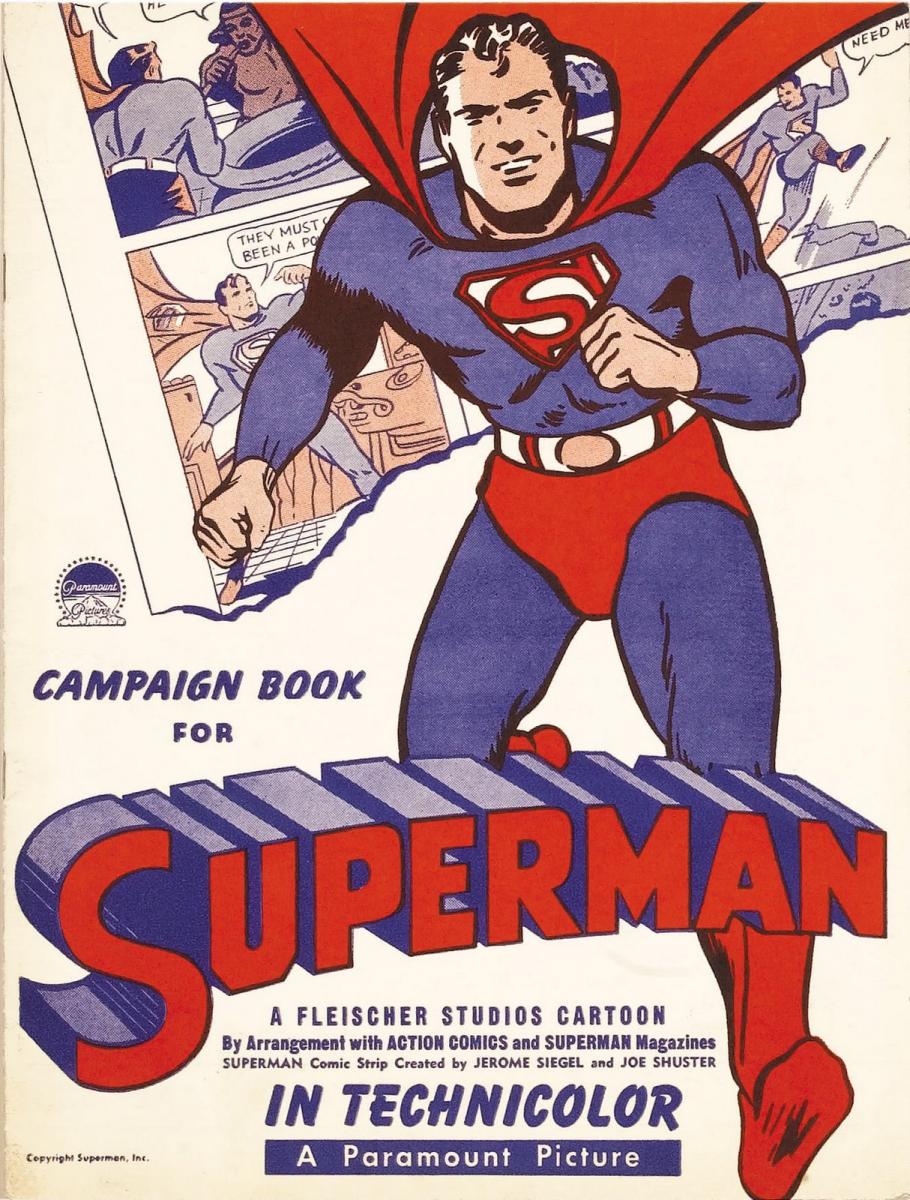 Arctic Giant Superman (Fleischer) 1942 Color
A giant prehistoric reptile is found in the Artic and is brought back to the Metropolis Museum for observation. Unfortunately, the heaters in the museum, causes the ice in the refrigeration unit to break down. The ice surrounding him melts, freeing the giant reptile. The giant beast begins a rampage, attacking the citizens of Metropolis. Luckily, Clark Kent and Lois Lane are at the Metropolis Museum, and Clark quickly changes into Superman. He tries to stop the giant lizard, in spite of Ms. Lane's efforts to get her story and get into Superman's way. The Man Of Steel gets the better of the Artic giant, tying him up, thus saving the city and Lois Lane once again.

Billion Dollar Limited Superman (Fleischer) 1942 Color
A shipment of gold is being sent by train to the U.S. Treasury at Fort Knox. Lois Lane is on board the gold train to cover the story for The Daily Planet. Unfortunately, a group of masked robbers are also hiding in the car, along with accomplices on the train tracks, prepared to steal the gold. The robbers derail the train and take control of the engine and the gold car. In the process, they capture Ms. Lane. Reading the news on the teletype, Clark Kent heads for the service entrance and changes into Superman. He flies to the train and saves Lois and The gold. Superman then captures the masked robbers, and brings them to justice. Finally, he delivers what's left of the gold car and the damaged train to Fort Knox.

Bulleteers Superman (Fleischer) 1942 Color
A group of dangerous terrorists- known only as The Bulleteers- are destroying Metropolis' city landmarks and utilities. They issue a ultimatum: unless the Mayor and city officials turn over the entire contents of the city treasury within 48 hours, the Police building, power systems and other city services will be destroyed. Of course, the Mayor and the city officials have no intention of giving in to the extortionists; they prepare themselves and the city for attack. After reading (in the Daily Planet, of course!) of the city's refusal to give in to their demands, the angry Bulleteers take off in their BulletCar for an all-out assault on Metropolis. The attack is merciless- even the Daily Planet's presses are wrecked. When Lois Lane drives off to the scene of the Bulleteers' latest attack, Clark Kent heads for the service entrance of The Daily Planet, and, making sure that he is not seen, he changes to his secret identity. He flies to the scene where he saves Lois from The Bulleteers' clutches, and then he wrecks The BulletCar, bringing the terrorists to justice.

Destruction, Inc. Superman (Fleischer) 1942 Color
Some spies sabotage a Metropolis munitions plant, capture Lois, and place her in a torpedo fired at a ship. It's up to Superman to save her.

Electric Earthquake Superman (Fleischer) 1942 Color
A vindictive Native American scientist visits The Daily Planet's editorial offices to ask the paper to print a request for the city officials to return the city of Metropolis and it's main borough Manhattan to his people. Mr. White and his staff refuse to print such a request and ask the scientist to leave. Angered, he tells them that their refusal to help him regain Metropolis for his people will only result in the destruction of the city. Perry White shrugs off the scientist's threats, seeing him as nothing more than a harmless kook. But Clark Kent and Lois Lane believe that this man is very dangerous, and Ms. Lane's penchant for getting into trouble takes holds once again. She follows the scientist to his undersea lab, where he sets off his electronic devices. He creates a series of artificial electronic earthquakes. Superman flies down under the City's bay and destroys the electronic systems and captures the mad scientist. Later, after reading her banner headlines on the deck of the Metropolis Ferry, Clark gives Lois his approval of her latest scoop.

Eleventh Hour Superman (Fleischer) 1942 Color
Clark and Lois are captives of the Japanese in the city of Yokohama. This gives Superman the opportunity to do some major sabotage! Lois is almost executed!

Japoteurs Superman (Fleischer) 1942 Color
The world's largest bomber (at that time) has been completed and is ready for a test flight. Lois and Clark are given a tour. Some evil Japanese spies sneak aboard and steal it. It's up to Superman to return it safely and save Lois who's trapped inside.

Jungle Drums Superman (Fleischer) 1943 Color
Lois Lane's plane goes down in Nazi-controlled territory in Africa while she is in possession of top-secret military intelligence documents. She is captured and taken to a secret Nazi base in the jungle. It's up to Superman to save Lois from death at the hands of Nazi-controlled natives.

Magnetic Telescope Superman (Fleischer) 1942 Color
Lois Lane, Clark Kent and Perry White watch as an excentric astronomer demonstrates his new invention- The Magnetic Telescope. It attracts a meteor toward Earth, but the experiment goes awry, and the trio can only watch in horror as fragments from space comes crashing down to Metropolis. After the destruction, city officials demand that the Professor stop doing his experiments with his magnetic telescope. The Scientist refuses to give in to the city's orders, instead proceeding with his plans to pull a comet from space. To stop him, the Metropolis police are forced to break into the astronomers power source, where they jam a crowbar into the generator and cut the power cables. Unfortunately, this does not stop the comet from continuing toward the Earth. With this impending doom literally hanging over her head, Lois calls the Daily Planet for help. Unable to get through- the lab's phone system is dead- Ms. Lane get's trapped by debris in the self-destructing lab. Clark sees the danger is coming, and changes into Superman. He is un successful in sending the comet back into space, so he returns to the lab where he removes the police's crowbar from the generator to start the power flowing again. Grabbing the cut cables, he splices them back together in his super grip. Reversing the power to the magnetic telescope, Superman repels the comet back into the void of space.

Mechanical Monsters Superman (Fleischer) 1941 Color
This cartoon marked the first introduction of Superman's X-Ray vision, as well as the first time Clark Kent used a telephone booth for his tranformation into Superman. Lois has been redesined with a more sensual look.

Mummy Strikes, The Superman (Fleischer) 1943 Color
A prominent Egyptologist is found dead in the tomb of an ancient Egyptian king, and his assistant is mistakenly convicted of the crime. Clark Kent is summoned by one of the dead professor's colleagues to try to find the truth of the matter. Lois Lane, who is, as always, hoping to scoop his story, follows him. Clark discovers what really killed the professor, but, in so doing, accidentally awakens the ancient, giant mummies who guard the tomb. He has to become Superman in order to save Lois and the professor.

Secret Agent Superman (Fleischer) 1943 Color
A female intelligence agent for the U.S. escapes her Nazi pursuers and attempts to deliver precious documents to Washington. On the way to the capitol, she is ambushed. Superman rescues her and once again, saves our country from evil!


Terror On The Midway Superman (Fleischer) 1942 Color
Lois Lane is assigned to cover the circus. As the performers of the big top do their acts, everyone, including Lois, is having a great time. That is... until a monkey lets a giant ape loose from his cage. The big gorilla scares the crowds, and sends everyone scurrying into the streets. Lois sees a little girl trapped on the edge of the bleachers. As she tries to save the little girl, the giant ape comes menacingly towards them.Seeing the police cars heading for the circus, Clark Kent suspects that there's trouble on the midway. He quickly changes into Superman and heads to the circus, where he saves Lois and the young girl, and captures the giant ape.

Underground World Superman (Fleischer) 1943 Color
Clark, Lois, and a professor journey to a lost underground cavern. There they find a race of birdmen! Lois and the professor are to be sacrificed, but Superman saves them just in time.

Volcano Superman (Fleischer) 1942 Color
A volcano in the South Pacific- dormant for many years- is about to erupt and endangers the entire area. Lois and Clark are sent to cover the story. Perry White send them on their way, hoping they can finally work together, but Lois has no intention of sharing a banner headline with Clark. She steals Clark's press pass, and while Clark is at the town hall trying to acquire another press pass, Lois heads off to the volcano. The volcano starts to erupt in earnest, spewing fire, smoke, falling rocks and molten lava everywhere, and sending everyone scurrying in a panic. Lois finds herself trapped on a aerial tram-car which has broken from its cables and is beginning to fall. Seeing the big eruption from the open door of the town hall, Clark quickly changes into Superman. In short order, he reroutes the flow from the erupting volcano to the sea, repairs the damage and saves Lois.