Popeye Cartoons in the public domain on broadcast quality masters. 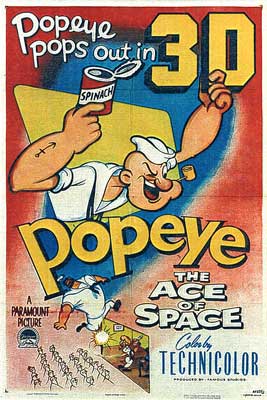 Aladdin And His Wonderful Lamp Popeye Color
Screenwriter Olive Oyl dreams up a story of Popeye in the Aladdin tale.

All's Fair At The Fair Fleischer-Popeye Color
Bluto gets Popeye into trouble with Olive by pushing her into a taffy pulling machine at the local fair.

Ancient Fistory Popeye Color
In this excellent Cinderella farce, Popeye is working in Bluto's Beanery, Poopdeck Pappy is his Fairy Godfather, and Olive is a princess. Outstanding music score and this is a must see cartoon.

Assault And Flattery Popeye Color
Popeye is on trial for beating up Bluto. They both show the judge (Wimpy!) some scenes from their cartoon, "A Balmy Swami" and "The Farmer And the Bell" to prove their points.

Big Bad Sinbad Popeye Color
Popeye and his 3 nephews tour a nautical museum and come across a statue with the inscription, "Sinbad the Sailor - Greatest Sailor In The World". Popeye scoffs at this and claims HE is really the greatest sailor in the world.

Bride And Gloom Popeye Color
Popeye and Olive are going to be married in the morning, but she changes her mind after a night of bad dreams of what their future marriage will be like.

Cookin With Gags Popeye Color
Bluto plays all sorts of gags on Popeye and Olive on April Fool's Day.

Date To Skate, A Popeye Black & White
Popeye and Olive go roller-skating. At one point, an audience member throws a can of spinach to Popeye.

Fright To The Finish Popeye Color
On Halloween, Bluto tries to scare Popeye and Olive.

Greek Mirthology Popeye Color
Popeye's 4 nephews would rather eat ice cream than spinach, so he tells them a story about how spinach saved his great Uncle Hercules.

Haul In One, A Popeye Color
Olive is moving out of her apartment and telephones both the Popeye and the Bluto Moving Companies.

I Don't Scare Popeye Color
Bluto makes superstitious Olive think that it's Friday the 13th, so that she won't go out with Popeye.

I Never Changes My Altitude Popeye Black & White
Olive closes her airport diner and flies away with aviator Bluto.

I'm In The Army Now Popeye Black & White
An economy cartoon in which Popeye and Bluto show scenes from their other cartoons to an Army recruiter so they can join up. Scenes shown are: Blow Me Down (with a new soundtrack), Shoe'in Hosses, Choose Your Weppins, And King Of The Mardi Gras.

Insect To Injury Popeye Color
Popeye tries to get rid of some pesky termites.

Little Swee' Pea Popeye Black & White
Popeye visits Olive and asks her on a date to the zoo. She is busy, so Popeye takes Swee'pea. Of course, Swee'pea escapes and Popeye finds him in the elephant cage, alligator cage, hippo cage etc. Popeye beats up the hippo (after eating spinach) but, by now Swee'pea is riding a leopard. Popeye knocks the spots off the leapord and returns Swee'pea home. Swee'pea is frightened by a toy monkey, and Olive beats up Popeye with a broom. Popeye sings a cool little ditty about never having children.

Out To Punch Popeye Color
Bluto tries all sorts of gimmicks to slow down and wear out Popeye before the big fight so that he can win the match.

Paneless Window Washer, The Popeye Black & White
The Bluto Window Cleaning Company drums up some business by dirtying some windows on a tall office building.

Parlez Vou Woo Popeye Color
Bluto disguises himself as the suave television personality, The International, so that Olive will go out with him rather than Popeye. Love Olive's looks, the reaction to her "idol," Popeye's being insulted, the classic duel scene, and Olive's cry of dismay upon learning the truth. All that AND a clean-shaven, handsome, tuxedoed Bluto who looks for the entire world like an animated Gordon MacRae!

Patriotic Popeye Popeye Color
It's the Fourth of July and Popeye wants his two nephews to have a safe and sane holiday. He takes away their box of fireworks and they plot to get it back.

Popeye For President Popeye 1956 Color
Election time again with Popeye on the Spinach Party and Bluto on the Blutocratic ticket.

Popeye Meets Ali Baba And His 40 Thieves Popeye Color
This is the second of The Three "Popeye"Specials and it's the best.Here Our Spinisch eating Sailor is a US Coast Guardsman.Who upon hearing of the ravagings of "AbDul Hassan"(Bluto)and his henchmen on the many towns in the Middle East."Popeye",Fellow Coast Guardsman:"Wimpy"and "Olive Oyl"head for the Arabic desterts to find and capture the bandit chieftian.The film is full of great sights gags,fast pacing color and an Exciting theme Song,worthy of Dennis King or Lawrence Tibbet.Even the ending is funny and exciting.As "Popeye"eats his spinisch and befor long.He gets out of the pit and does battle with "Abual Hassan"and his 40 Thieves.Forget Walt Disney studios attemps to capture "the Abrabian Nights"on film.This is the real Cartoon version of those stories.

Popeye Meets Sinbad The Sailor Popeye Color
This was the first Popeye cartoon produced in color, and was the first Fleischer cartoon to be nominated for an Academy Award. Up until this time.The Paramount/Fleischer Popeye. Movie cartoons were shown in Black and White and lasted a few minutes.The short films were and still are funny.But by late November of l936.Mr.Max Fleischer and his staff felt.That It was time to do a special featurette version of the series.Hence.Our Superstrong Sailor went head to head with The Abrabian Nights most dreaded villian:Sinbad. Here Sinbad is an arrogant,abusive recluse on a South Sea Isle.Who does little more than brag about his previous exploits and take his animosities on the prehistoric creatures that inhabit his atoll.But The Ego tripping Sinbad is in for a rude awakening?! When Popeye sings his praises.While sailing by Sinbad's island with Olive and Wimpy Aboard his ship.Angered and envey running thru his veins.The vendictive Sailor sends his giant Roc to sink Popeye's Ship and Bring Olive back as his prisoner. Olive is Captured.But Not before Our hero heads for the Island and defeats The Roc,Boola The arguing two headed giant and Finally Sinbad Himself.The film is full of great sight gags,great color and fast pacing.There is even an original song Who's The Most Remarkable Extra ordinary Fellow? Sinbad The Salior .And a funny opening title listing that would even please The Animator at Warner Bros.

Popeye's 20th Anniversary Popeye Color
All of the Paramount movie stars turn out for an award ceremony honoring Popeye's 20 years as a cartoon star. He shows footage from Rodeo Romeo and Tops In The Big Top.

Private Eye Popeye Popeye Color
Detective Popeye is summoned to the home of the rich Olive Oyl to guard her valuable diamond and the butler turns out to be a crook. Popeye chases him all around the world Tex Avery style.

Spooky Swabs Popeye Color
Popeye and Olive are stranded on a raft at sea, until they board a ghost ship and try to head it back to civilization. The last theatrical Popeye cartoon.