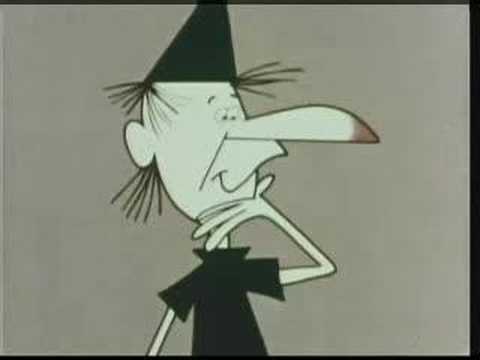 
Ali Baba Pied Piper 1963 Color
Ali Baba is a poor man who stumbles across the hidden treasure cave of the 40 Thieves and uses the treasure to help himself and his wife. Troubles involving his greedy brother and the 40 Thieves threaten to take away the new-found wealth for Ali Baba and his wife.

Brave Molly Pied Piper 1963 Color
Molly and her two sisters are traveling when they come across the home of a giant. Quick-witted Molly is able to outsmart the giant to save her sisters as well as the captured queen.


Hasty And The Princess Pied Piper 1963 Color
A simple country boy tries to win the hand of the lovely princess by trying to complete the tasks assigned by her father, the King. With the aid of the animal friends he has aided on his travels, our hero is able to complete the tasks and prove his worthiness for the princess.

Kindhearted Girl, The Pied Piper 1963 Color
A kind little girl's father marries a wicked woman. The woman sends the girl off to the woods to visit her new aunt, a witch. Gathering things along her way to the witch's house, she is able to elude the evil plans of the witch and return home to her father.

Magic Horn, The Pied Piper 1963 Color
Peter, a simple traveler, sets out on the road to find his fortune. He loses all of his worldly possessions and trades the last item for a simple horn. Peter eventually learns that the horn is magic, and he uses it to gain the hand of a princess.

Proud Princess, The Pied Piper 1963 Color
The tale of a vain princess and the handsome prince who loves her. After she rejects the gifts that he sent to her, the prince disguises himself as a simple stableboy to try to learn more about her. After finding out the truth about the princess, he decides to choose another for his bride.

"Story Of The Three Brothers Pied Piper 1963 Color
Three brothers go out to seek their fortunes, and are amply rewarded by their employers when they decide to return home.The eldest worked for a carpenter who presented him with a table that magically produced food whenever the words ""dinner is served"" were spoken. On his way home, the boy stopped at an inn, where he fed all the guests from his amazing table. While the boy slept, the innkeeper stole the table from his room and replaced it with an ordinary one. Back home, the table didn't produce food on command, and the boy was laughed at by everyone.The miller that the second brother labored for gave him a donkey that dropped gold coins from its mouth whenever ordered to bray. The boy stopped at the same inn where his brother had stayed and paid for his meal with coins from the braying donkey's mouth. That night the innkeeper struck again and the boy returned home with a different donkey. He too was ridiculed after the donkey simply yawned when given the braying command.The third brother was awarded a stick in a bag by his farmer boss. When the words ""out of the sack"" were said, the stick flew into the air and waved menacingly. The farmer explained that the stick would hit only those who deserved a beating.Once he got home, the boy's two brothers complained to him about the duplicitous innkeeper. Their brother's stick in a sack impressed no one. The boy suggested they all ask the innkeeper for jobs, since he was now the richest man around. Their new boss was a slave driver. The youngest boy told him that his sack contained something that would make him a fortune, so while the brothers were resting, the innkeeper grabbed the boy's bag. The awakened boy shouted ""out of the sack!"" and the magic stick jumped out and beat the innkeeper in the head. The boy told the innkeeper that the only way to stop the thrashing was for him to return the two other magic gifts, which he did.

" Story Of The Three Soldiers Pied Piper 1963 Color
Mr. Piper is a Canadian children's TV series made in 1963. The series was created by Martin Andrews and Allan Wargon, who was also the producer.

Three Sisters, The Pied Piper 1963 Color
A rich man has three daughters. After displeasing her father, the youngest daughter must leave the house and, while disguised in an outfit of rushes, finds work in the home of a rich family. She eventually wins over the heart of her employer's son and returns to make up with her father.

Tin Soldier, The Pied Piper 1963 Color
"The Steadfast Tin Soldier" (Danish: Den standhaftige tinsoldat) is a literary fairy tale by Hans Christian Andersen about a tin soldier's love for a paper ballerina. After several adventures, the tin soldier perishes in a fire with the ballerina. The tale was first published in Copenhagen by C.A. Reitzel on 2 October 1838 in the first booklet of Fairy Tales Told for Children. The booklet consists of Andersen's "The Daisy" and "The Wild Swans". The tale was Andersen's first not based upon a folk tale or a literary model. "The Steadfast Tin Soldier" has been adapted to various media including ballet and animated film.On his birthday, a boy receives a set of 25 toy soldiers and arrays them on a table top. One soldier stands on a single leg, having been the last one cast from an old tin spoon. Nearby, he spies a paper ballerina with a spangle on her sash. She too is standing on one leg and the soldier falls in love. That night, a troll among the toys angrily warns the soldier to take his eyes off the ballerina, but the soldier ignores him. The next day, the soldier falls from a windowsill (presumably the work of the troll) and lands in the street. Two boys find the soldier, place him in a paper boat, and set him sailing in the gutter. The boat and its passenger wash into a storm drain, where a rat demands the soldier pay a toll. Sailing on, the boat is washed into a canal, where the tin soldier is swallowed by a fish. When the fish is caught and cut open, the tin soldier finds himself once again on the table top before the ballerina. Inexplicably, a boy throws the tin soldier into the fire. A wind blows the ballerina into the fire with him; she is consumed at once but her spangle remains. The tin soldier melts into the shape of a heart. Mr Piper was a Canadian children's TV series made in 1963. The series was created by Martin Andrews and Allan Wargon, who was also the producer. The show's host was a large Canadian opera tenor Alan Crofoot, dressed as a Pied Piper with a flower in his hat. He would introduce four segments in each half hour program:Teletune - as a narrator of a fantasy stories illustrated with graphics; Port of Call - presenter of films about children and events in other lands; Bag of Tricks - Crofoot performs magic tricks;Animal Farm - many farmyard characters telling the story of the day in miniature barnyard sets, featuring Rupert the Rat, Bessie the Bunny, Kookie the Kitten, Harriet Hen, Freddie Frog, Calvin (Rac)Coon and Charlotte Cow.Alan Crofoot was the program host, introducing four parts in each episode. In the first part (Teletune) he narrated a fantasy story. In the second part (Port of Call) he presented films about children and events in other countries. The third part (Bag of Tricks) featured magic that was performed by Crofoot himself. And in the fourth part (Animal Farm) he told stories, that included characters such as Rupert the cat, Bessie the bunny and Kookie the kitten, all in a miniature farm/barnyard setting. Alan Crofoot (June 2, 1929 - March 5, 1979) was an operatic Heldentenor and character tenor specialist, as well as actor, who is best remembered as the host of Mr Piper, a children's television series made in 1963. It was originally shown by the Canadian Broadcasting Corporation, and also became well-known in the United Kingdom. Crofoot hosted the show dressed as a Pied Piper, with a flower in his hat.Crofoot was born in Toronto, Canada. He appeared in stage productions of musicals such as Man of La Mancha, in London's West End, and Oliver! on Broadway. His operatic career began at the Canadian Opera, as Spoletta in Tosca, in 1956, and included creating the role of Josiah Creach in the world premiere of Carlisle Floyd's Markheim, with Norman Treigle and Audrey Schuh, in New Orleans (1966), as well as appearances at the New York City Opera (Herod in Salome, opposite Maralin Niska, in 1975) and the Metropolitan Opera (The Bartered Bride, directed by John Dexter, in 1978). He also appeared in musical-comedy, including Oliver!, at Winnipeg's Rainbow Stage. He committed suicide in Dayton, Ohio, at the age of forty-nine, while preparing a production of Salome in 1979.