Melotoons cartoons in the public domain on broadcast masters. 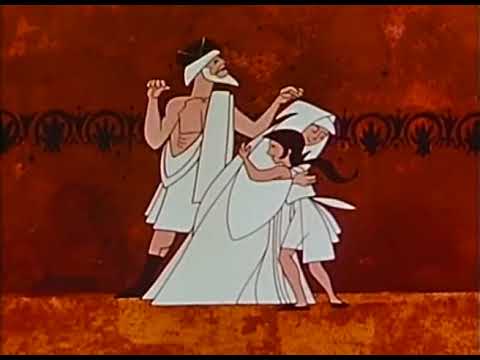 Ali Baba Mel-O-toons 1936 Color
Remember kids, if you steal a thief's hoard and then kill him, you'll be a hero! Never mind who he stole the treasure from or anything. They probably deserved it.

Christopher Columbus Mel-O-toons 1962 Color
Operetta about the Italian-born mapmaker who proved that the world was round.After a seven-year quest, Columbus enlisted the aid of Queen Isabella of Spain. Believing the world to be round, he would sail west (rather than east) to reach the Indies, and bring back spices and other riches.Leaving with three small ships on August 3rd, 1492, a voyage of over two months into uncharted waters brought Columbus and his men not to the Orient, but to an island inhabited by unusual-looking people. Believing he was in India, Columbus named them "Indians." After claiming his landing place, "San Salvador," for Spain, Columbus explored other islands, still searching for a passage to India. Failing in this, he returned to Spain to great acclaim. Three more voyages followed, but Columbus never realized he'd discovered a whole new continent.

Diana & The Golden Apples Mel-O-toons 1960 Color
Mel-O-Toons sometimes erroneously called "Mello Toons", was a series of animated cartoons produced beginning in 1960 by New World Productions (Not to be confused with the production company founded by Roger Corman) and syndicated by United Artists

Le Escargo/ El Torito Mc Graw-Hill 1960 Black & White
A group of young Spanish boys want to be a matador and try using a baby bull to practice on. The little bull is not amused or cooperative.

" Paul Bunyon Mel-O-toons 1960 Color
Tall tales of the giant lumberjack are depicted by narration alternating with folk songs. Baby Paul tore a tree out of the ground, roots and all. At age 18, he was 25 feet tall and weighed 800 pounds. Soon after, Paul began his life's work: clearing Western forests so that cities might be built. With five axe strokes, Bunyan cleared a 10 mile plot to help a struggling Wisconsin farmer.During the Revolutionary War, Bunyan defeated Hessian artillery by hitting their cannon balls back at them with a tree trunk. By splashing one foot in the ocean, Paul sank an entire pirate fleet. He built the Rocky Mountains with his bare hands, and shovelled out giant trenches that filled with rainwater and became the Great Lakes. In a single day, Bunyan dug the Erie Canal, which ran from Buffalo to Albany. In his old age, Paul built the Big Rock Candy Mountain.

Robin Hood Mel-O-toons 1960 Color
During the Middle Ages a young man who is declared an outlaw fights for the oppressed.

Tom Sawyer Mel-O-toons 1960 Color
Young Tom Sawyer's mischievous ways greatly troubled his Aunt Polly.Late one night, Tom and his friend Bill Harper played "river pirate." While on Jackson's Island, they saw Injun Joe and another man arguing over a large black box. Joe stabbed the fellow and planted his knife on a third man who was asleep by the fire. At the court trial, Tom exposed the real killer and Joe escaped by smashing through a window.After several weeks had passed with Injun Joe nowhere to be found, Tom and Bill returned to the island in search of the black box. Joe appeared almost as soon as they located the treasure-filled box, and they had to abandon it to save themselves.Later, Tom and Becky Thatcher took a day cruise to Jackson's Island. They explored a cave where Tom thought Joe may have rehidden the box. They found it but got temporarily lost in the cave. After Tom brought news of the box back home, the townspeople set up a guard at the cave to await Joe's return. He was eventually captured, and Tom received a portion of the treasure as a reward.

Treasure Island Mel-O-toons 1960 Color
Young Jim Hawkins sails for Treasure Island with a crew that includes one-legged Long John Silver. Most of the sailors are loyal men, but some (including Long John) are pirates in search of riches. Once on the island, Jim meets an old hermit named Ben Gunn who claims that Jim is part of the pirate crew seeking his treasure. He denies this. The pirates then appear and Long John forces Gunn to take him and his men to the treasure, which is hidden in a cave on the other side of the island.Loyal seamen track them to Gunn's cave. A fight ensues and Long John's pirates are defeated. Ben Gunn and his chests filled with gold and jewels are returned safely to civilization.

Trojan Horse Mel-O-toons 1960 Color
Greek soldiers invade Troy to recapture beautiful Helen. After an unsuccessful siege, the Greeks apparently depart, leaving behind a peace offerng: an 80-foot tall wooden horse. Hidden inside however are Ulysses and five men. The night after the horse is brought past the walls, the six quietly exit the horse and throw open Troy's gates. Their army storms the city, capturing it and Helen