Max Fleischer cartoons in the public domain on broadcast masters. 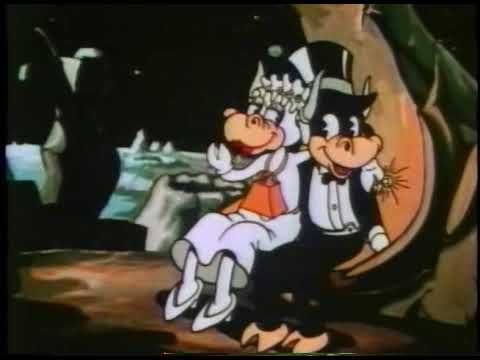 
An Elephant Never Forgets Fleischer 1934 Color
Animal children ship off to school in their daily routine, then go through their lessons in a musical review led by their duck teacher. Everyone remembers the routine but the Elephant

Ants In The Plants Fleischer 1940 Color
A classic about an anteater who makes life rough for a colony of ants. In the ant community, the queen spreads warnings of their greatest enemy , the Anteater. "He's a menace, he a brute, he will scoop you with his snoot." Their motto is "make him yell uncle," which they do when the anteater invades them.

Barnyard Brat, The Fleischer-Hunky 1939 Color
Spunky is a bratty nuisance around the farm, and Hunky is reluctant to punish Spunky until the last straw breaks her back.

Bunny Mooning Fleischer 1937 Color
It's the wedding of Jack and Jill Rabbit built around the song "Everybody's Getting Ready for the Wedding."

Car-Tune Portrait, A Fleischer 1937 Color
A tale about the animator's hand that is drawing the pictures of some crazy animals playing music. Although the opening is in the mode of the Out Of The Inkwell films, the cartoon characters attempt to prove that they can perform on a higher level of dignity and culture until everything falls apart, resorting to their usual mode of behavior- satire and mayhem

Chicken A La King Fleischer 1937 Color
An Arabian rooster has a harem of chickens. But life is a bore until Duckie Wuckie (A Mae West-styled duck) pays him a call. She's a wise quackin' gal who can be your pal!

Cobweb Hotel Fleischer 1936 Color
Mr. Spider runs the Cobweb Hotel in an abandoned writing desk. When newlyweds Mr. and Mrs. Fly arrive on thier honeymoon, they discover that the 'hotel' is in fact Mr. Spiders' larder. However Mr. Fly is the flywieght boxing champion, and while he battles the evil spider, Mrs. Fly frees the other 'Guests' while extracting a terrible revenge on their host

Dancing On The Moon Fleischer 1935 Color
Various animal newlyweds take a rocket ship to the moon, where they dance the night away to "Dancing on the Moon (With You In My Arms)."

Fire Cheese Fleischer-Gabby 1941 Color
Gabby tries to help the Lilliput Fire Department put out a fire at an old house. As usual, he does nothing more than get in the way. The bumbling town crier gets trapped on the roof of the burning house. The Fire Department reluctantly saves him.

Fresh Vegetable Mystery, The Fleischer 1939 Color
The setting of this cartoon is a kitchen inhabited by living vegetables. A mysterious figure kidnaps some carrot babies and several Irish potato police officers commence an investigation. They try to squeeze the truth out of an orange and promise an egg that he'll fry if he's guilty. The latter isn't intimidated because, after all, he's already hard-boiled!

Gabby Goes Fishing Fleischer-Gabby 1941 Color
In his usual manner, the bumbling know-it-all town crier, Gabby attempts to teach a young boy how to cathc the really big fish, and ends up getting hooked himself

Greedy Humpty Dumpty Fleischer 1936 Color
Humpty Dumpty- seen here as a greedy and abusive monarch- wants to acquire the gold from the sun. He forces his subjects to build his palace's golden walls higher, so that he can reach the sun. When they do reach the sun, King Humpty tries crack it open with his battle ax. He is overcome by sun's awesome power. The walls of his palace and the castle itself are destroyed and the miserable monarch is sent crashing to the ground, a heap of broken egg shells and a busted crown.

Hawaiian Birds Fleischer 1936 Color
A young female bird takes off with a 1930s swing jazz band (the Baltimore Orioles) to New York from her serene Hawaiian environment. The cartoon turns into a bleak depiction of the Depression in 1930s Manhattan. The bird is thrown out of a swanky jazz club in mid-winter, becomes despondent, and even attempts suicide. But there's a happy ending.

Hunky And Spunky Fleischer 1938 Color
Hunky and Spunky, a mamma mule and her child have adventures in the wild west. Trouble lurks as a miner is looking for a pack animal!


Kick In Time, A Fleischer-Hunky 1940 Color
Spunky the donkey is grabbed and sold to a cruel, overbearing owner. Just wait till his pal comes to save the day.

Kids In The Shoe, The Fleischer 1935 Color
The old lady who lives in a shoe has a bit of trouble with her gaggle of children. They won't eat their porridge, won't brush their teeth or comb their hair, and as soon as their mother is in bed they launch a wild party, doing a swinging rendition of Smiley Burnette's classic "Mama Don't Allow No Music Playing Round Here." The threat of castor oil for the kids- which turns out to be a good belt of cider for Mom- puts things right

King For A Day Fleischer-Gabby 1940 Color
Gabby is hired to deliver a letter to King Little. The note to His Majesty informs him that someoone is coming to kill him. Fearful that he has been marked for assination, King Little has his meddlesome town crier pose as the King, while he takes on the identity of The Town Crier. When the unknown person comes to shoot the king, Gabby wants out of the royal job. But King Little insists that he remain the king. Gabby manages to leave the palace in a hurry, while King Little is hit with a blinding light. But the blinding light turns out to be nothing more than flash from a camera


Little Dutch Mill Fleischer 1934 Color
The scene painted on a Dutch plate sitting in a china cabinet comes to life. It's a simple tale of a Dutch Hans(el) and Gretel and their pet duck, who play around a mill inhabited by the town miser. The miser catches the children spying on him as he counts his gold and ties them up, threatening to burn their tongues out.

Little Lambkins Fleischer 1940 Color
A curly-headed moppet enjoys playing with animal friends in the suburbs. Father and mother move to modern apartment in city, where boy schemes to move back home.

Mite Makes Right, The Fleischer 1948 Color
Heartbroken because he can't help his dad on their farm, tiny Tom Thumb runs away and achieves fame with the circus.

Musical Memories Fleischer 1935 Color
A medley of popular turn-of-the-century songs accompanies an old couple's reminiscences of their youth and courtship.

Peeping Penguins Fleischer 1937 Color
Four baby wander off from their mother and enter a hunter's cabin in the frozen north. Their curiousity to explore all the strange things inside only gets them into trouble, proving that Mother's sone of advice was right, only to find mother curious in the end as well

Play Safe Fleischer 1936 Color
A small boy is playing with his toy trains in the yard with toy trains, guarded by his faithful dog, who is tied to a nearby tree. He's obviously mad for trains, and when a real train goes by outside, he runs away to climb aboard. The frantic dog breaks his rope to give chase. The little boy makes his way alarmingly to the engine, where he starts the train. The gauges turn into taunting, scary faces which shriek at the boy to "Play Safe!" As the train hurtles towards a collision with another engine, the valiant dog runs faster and faster. The moments of greatest suspense are played out in a really fabulous Fleischer 3-D model/animation sequence. At the last possible moment, the dog rescues the boy before the trains crash

Small Fry Fleischer 1939 Color
A small catfish tries to grow up in a hurry, but after he is initiated as a member in the Big Fry Club, he gets scared and runs home to his mother


Snubbed By A Snob Fleischer-Hunky 1940 Color
Spunky the donkey is snubbed by a prissy horse with curlers and gets the bull mighty angry.

Somewhere In Dreamland Fleischer 1936 Color
A poignant story of two poor children who are out collecting firewood when they pass by a toy store, market and finally a bakery. They drool over the wares in the bakery window but walk away before the owner can come out and present them with two cupcakes. The kids go home and eat a meager supper before going to bed. They both dream they are in dreamland, where everything is free--cookies, candy, cakes, popcorn and toys. When they wake up it's all gone but the three merchants have stopped by to lay out a huge feast for them. Lovely story with timeless music.

Song Of The Birds Fleischer 1935 Color
A flock of robins is teaching their young ones to fly. Meanwhile, a boy with an air rifle is shooting at everything in the house. He goes out into the garden and shoots at a nest, then at one of the little birds. The bird falls to the ground, and it appears the boy has killed it.

Time For Love Fleischer 1935 Color
When a goose returns after making the wrong choice in love, she finds all is forgiven, and her true love wins out.

Two For The Zoo Fleischer 1941 Color
Gabby and the head Zoo keeper at the Lilliput Zoo bring in a new kangaroo to the zoo. A delivery man pushes a crate down the street containing a Rubber Necked Kango. Gabby bumps into the crate, and in his usual know-it-all fashion, offers to personally deliver the animal, a baby. Gabby doesn't know that the mother is also in the crate, and she catches up with them, dropping the baby into her pouch, causing Gabby to think that the baby suddenly grew. They end up getting trapped in the kangaroo's cage and the Kangaroo runs free.

Vitamin Hay Fleischer-Hunky 1941 Color
Spunky would rather eat junk than his hay, and accidentally swallows a bulb horn, which honks every time he hick-ups. This offends a pair of lovey-dovey geese, and Spunky learns his lesson the hard way.