Felix the Cat cartoons in the public domain on broadcast masters. 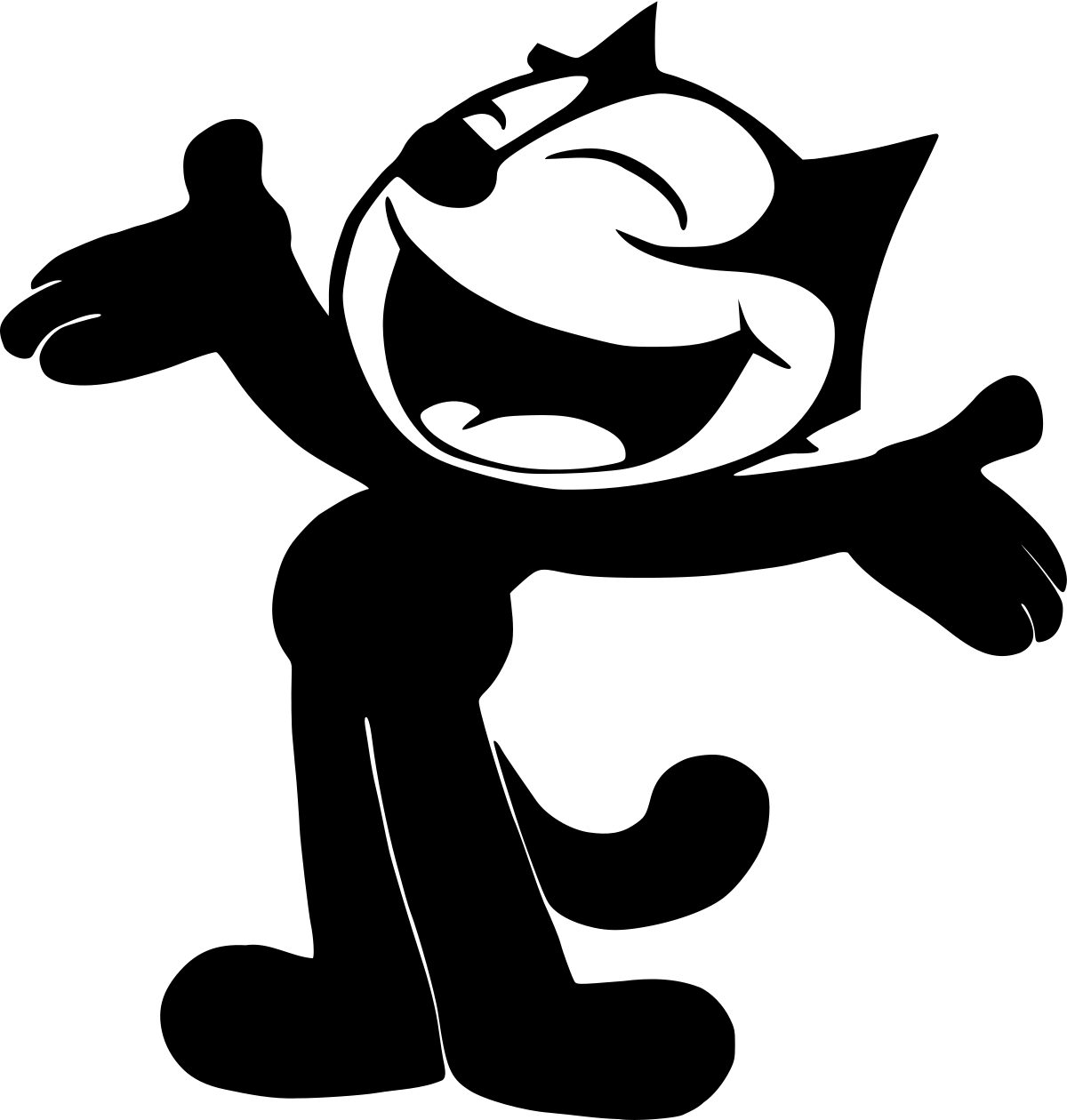 
All Puzzled-Title Cards Felix The Cat 1925 Black & White
"You don't eat till I solve this puzzle," says Felix's crossword-loving master. To help him (and himself), Felix travels to Bolshevik Russia. "Whee! I'm in Russia! Now to solve that X-word puzzle!" Felix exclaims. But Felix runs into havoc amid bomb-throwing revolutionaries. Upon his return, he reports that "all I found in Russia was trouble!" Lo and behold, "trouble" was the missing word!

April Maze Felix The Cat 1930 Color
Felix and two other feline friends have a picnic, where they encounter very unpredictable storms, dancing sausages, a snake-charming rabbit and a walking tree. After a day of troubles, the last thing Felix needs to see is the stork, who brings him a basket full of tiny Felixes.

Cat And The Goose Laid Egg Felix The Cat 1936 Color
Felix gives away stacks of golden coins to the poor. Felix gets his gold from Goldie, his golden egg-laying goose. When Captain Kidd- the bulldog-like pirate- espies Goldie, he kidnaps the feathery treasure trove and takes her to his ship. Coming to her rescue, Felix captures Captain Kidd and his pirate crew to the cheers of the local townspeople.

Felix in Pedigreedy Felix The Cat 1927 Black & White
Anxious to prove his noble lineage at the 400 Club, Felix boasts of his ancestors, who showed Ramses how to Charleston and who taught Columbus that the world was round. Felix also tells the cats that his roots go back to Noah's Ark.

Felix The Cat Doubles For Darwin Felix The Cat 1925 Black & White
Felix burrows through the Trans-Atlantic Pipeline to get some monkeys and fights with a swordfish.

Felix The Cat Finds Out Felix The Cat 1924 Black & White
Willie (Felix's owner) can't figure out why the moon shines, so Felix goes in search of the answer.

Felix The Cat Gets The Can Felix The Cat 1925 Black & White
Felix is advised to travel north in search of salmon. In Canada, the feline duels with bandit Dan McStew, is tricked by the local fish, and winds up in a can along with them.

Felix The Cat Goes West Felix The Cat 1924 Black & White
After misadventures among an Indian tribe and a chase with a bear, Felix is frightened by the wooden Chief outside a cigar store. Silent cartoon.

Felix The Cat In Hollywood Felix The Cat Black & White
Felix has to earn the money to go to Hollywood - in search of the elusive long term contract. Felix has several adventures on his journey to stardom.


Neptune Nonsense Felix The Cat 1936 Color
Felix goes fishing to try to find a companion for his lonely pet goldfish Annabelle. A powerful swordfish pulls him to the bottom of the sea, where he observes a number of undersea sight gags (an octopus traffic cop, fish who eat each other in sequence, an electric eel). Felix finds a suitable fish and tries to make off with it, but the entire undersea community gives chase and has him arrested as a kidnapper. He is taken before King Neptune (who has a topless mermaid dancing for him!) for trial. The king is angry, but when Felix explains himself, Neptune takes him to a fish orphanage, where he can select a fish that really needs a home. Neptune drops them off back at the shore, and everyone lives happily ever after.