Dick and Larry Cartoons in the public domain 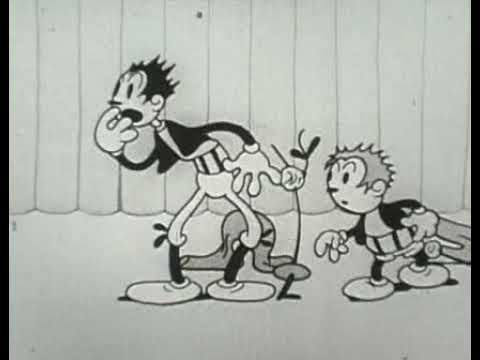 Barnyard Bunk Dick,Larry 1932 Black & White
An old farmer has let his entire farm go and it is falling down around him, with mice taking over. Tom and Jerry (the human versions, not the cat and mouse) show up with magical saxophones, and the music has amazing effects on the farm. A chicken lays dozens of eggs, a cow gives gallons and gallons and gallons of milk, and two woodpeckers don't just peck a tree, they cut it down and split it into firewood. Even the farmer's well changes, filling with beer (by the mug of course) instead of water. The farmer trades Tom and Jerry a huge bag of money for the saxophones, but he gets the better deal - the bag is full of the mice from the start of the cartoon, and they carry Tom and Jerry off to throw them into the pond.

Happy Hoboes Dick,Larry 1933 Black & White
Tom and Jerry are hoboes, but the city is demolishing the hobo camp. They hop a ride on a freight train. The train comes to a lumber camp, where the Chinese cook has just prepared a huge platter of roast chicken; he invites the train people to eat, but hundreds of bums descend. He chases them off, into a log slide, and they end up right back in the original camp.

Jolly Fish Dick,Larry 1932 Black & White
Tom and Jerry go fishing, where they encounter an affectionate but annoying fish who won't leave them alone. They hear a piano-playing octopus (with twelve arms!) and have a run-in with a sword fish who cuts their boat in half. Other hijinks ensue, and the two eventually catch a tiny fish, which is in turn swallowed by a larger fish, and this process continues until they've caught a veritable whale. They row ashore triumphant, but when one of them puts their reel (still holding the fish) over their shoulder, the larger fish slip off, unbeknownst to them, leaving them with the runt they started with.

Puzzled Pals Dick,Larry 1933 Black & White
Tom and Jerry are solving a jigsaw puzzle when the stork, frustrated by all the quarantine and "not welcome" signs, leaves a foundling on their doorstep. The tot proves to be more than a handful for them; eventually, he ends up in a closet with a giant vacuum cleaner which causes mayhem. The stork shows up and, disgusted with the job Tom and Jerry have done, decks them and flies off with the baby.

Tight Rope Tricks Dick,Larry 1932 Black & White
Tom and Jerry have fun at the circus and then show their acrobatic talents on a tightrope. They get into trouble with an ornery lion and are chased from the Big Top by the feline's friends. When the defend themselves by spraying the lions away with an elephant's trunk, they accidentally flood the circus but are able to float away unscathed.