Casper The Friendly Ghost cartoons in the public domain 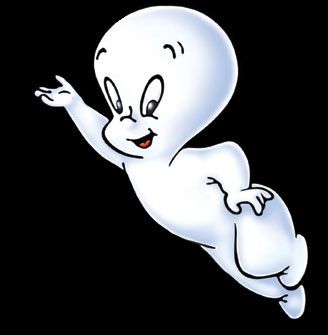 
Friendly Ghost, The Casper 1945 Color
Casper runs away from home and the other ghosts there to explore the world and make friends. After unintentionally scaring away several different animals, he decides to end it all by laying on the railroad tracks in front of a speeding locomotive. Failing that, two children, Bonnie and Johnny, find him crying on the tracks and befriend him.

Haunting We Will Go, A Casper 1949 Color
Casper is a dunce in school because he won't scare anyone. He hatches a duck egg and calls the baby duck, Dudley.

Spooking About Africa Casper 1957 Color
Casper the Friendly Ghost helps Wheezy the elephant get rid of his bad sneeze.